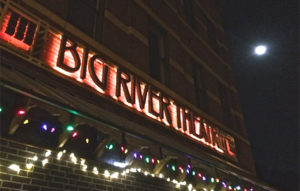 Built in the same era as the Eiffel Tower, the space known today as Alma’s Big River Theatre stands tall as a community icon with a rich local history.

After a fire destroyed the original 1889 structure, Alma merchant Lutzi Tscharner bought the vacant land and hired a crew to construct a new, more fireproof building in 1895. Known as the Tscharner Building, the red brick building was three stories high. The first floor boasted 12-foot-tall ceilings, large cellars below, and a roomy storeroom — ideal for its use as a mercantile. Nine rooms on the second floor housed the Tscharner family, while a hall and even more bedrooms occupied the third. Perfect for a game of hide-and-seek!

Mason and merchant Peter Ibach likely could not resist the “for sale” sign that appeared on the building in 1904. He signed the deed, and the Tscharner Building was quickly reborn as the Ibach Building. Those sturdy bricks continued to house a mercantile, but a remodel transformed the third floor into the headquarters of the local Masonic Lodge. The Masons rented the place for the tidy sum of $75 per month until 1914, when Ibach, a savvy financier and president of the German American Bank, sold the building — to his own bank!

In 1916, the first movie theatre was introduced, thrilling the community with Hollywood fantasies. But the screen went dark in 1928 and did not light up again until 1940, when F.H. Malone of Hammond, Wisconsin purchased the Ibach Building and undertook a $16,000 remodel to create a state-of-the-art movie theatre, complete with over 200 cozy crimson seats. “It All Came True,” starring Humphrey Bogart, was the first big picture to roll through the new projector.

Mr. Malone sold the building to Clinton and Beulah Price in 1948. Movies continued to light up the silver screen until 1964, when the building was sold to the Masonic Lodge renters upstairs, and the screen went dark once again.

The Masons held on to the old Ibach Building for nearly 30 years before selling to Mac and Shelly Cherry, who gave the Big River Theatre its current name and began booking live performances in 2001. Since then, countless music and comedy acts have appeared on stage. One of the most popular events is the “Big River Radio Wave,” a variety show performed before a live audience and broadcast on public radio stations throughout Wisconsin.

After the Cherrys passed their theatrical wand to Jack Spencer in 2015, Jack set to work refurbishing the place. While work was in progress, he offered a tour to Pepin, Wisconsin residents Scott and Irene Wolf, who fell hopelessly in love with the building and its history. They had a vision for its future, and in 2017 they took the reins and began turning that vision into reality, opening the doors to live theatre, music, independent films and, most importantly, community camaraderie, 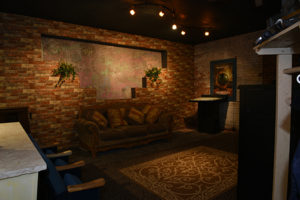 “Long-time local citizens pop in to reminisce about the 25¢ tickets and Saturday afternoon westerns,” says Irene. “It’s a beautiful, intimate space with great acoustics, so each show feels like a personal experience for both the performers and the audiences.”

Just as Parisians love the Eiffel Tower, Alma residents love their iconic performing arts theatre. Scott and Irene continue to honor and boost this longstanding affection by welcoming guests to enjoy art and culture right here on the big river.